An attempt has been made in this exhibition to depict the importance of the Quit India Movement in India’s freedom struggle through public records, private letters, maps, photographs and other relevant material. The exhibition will be open to the public from August 9 from 10 am to 5:30 pm till November 8, 2021.

Addressing the media after a detailed tour of the exhibition, Shri G. Kishan Reddy said that the independence struggle is gilded with golden chapters of unity, strength and determination and one such proud event was the Quit India Movement and how even almost eight decades later, the movement stands as a shining example of power of the masses. It will remain so for many more decades to come, he added.

The Minister spoke about India celebrating the 75th year of Independence through events organized under the Azadi Ka Amrit Mahotsav theme. The events commenced in March this year  which started a 75 week countdown to our 75th anniversary of Independence and will end post a year on 15th August, 2023. “This is a moment to not only recognize the contribution of a generation in freeing our nation from colonial powers but also to recognize those who played a pivotal role in preserving our civilization heritage for more than 750 years. There are many unsung heroes who need to be recognized for the selfless services they rendered to Bharat Mata” he added.

Shri Kishan Reddy also said that AzadiKaAmritMahotsav celebrates the sentiment of oneness and freedom, as we all together celebrate 75 years of independence. Shri Kishan Reddy requested the media to also support the government’s initiative of propagating the message of oneness and the Prime Minister’s vision of seeing an India 25 years from now driven forward by today’s youth “The Prime Minister has often spoken about how this event will also spur the youth to envision an India in 2047”, he added.

Earlier, signing the visitor register after inaugurating the exhibition on  Quit India Movement, Shri Kishan Reddy wrote, “The template for the Quit India Movement is relevant even today as we commemorate the 79th year of the struggle. In 1942 Mahatma Gandhi’s Quit India drove out the colonial forces. In today’s New India, as shared by the Prime Minister last year, we can pledge to wipe out poverty, inequality, illiteracy, open defecation, terrorism, and discrimination and say Quit India to these evils”.

The Union Minister and his counterparts also encouraged everybody to sing the National Anthem and upload their videos at www.rashtragaan.in. “I am pleased to share that as a part of ‘Azadi Ka Amrit Mahotsav’ celebrations, the Ministry of Culture is running a first of its kind crowd sourced ‘Rashtra Gaan’ campaign, where-in one can sing our national anthem and upload its video recording on rashtragaan.in. All such videos will be compiled and telecast live this Independence Day. I request you to be a part of this unique unifying event by uploading your video while singing our national anthem on www.rashtragaan.in “, he said. The ministers also used the occasion to sing the national anthem and upload their videos. 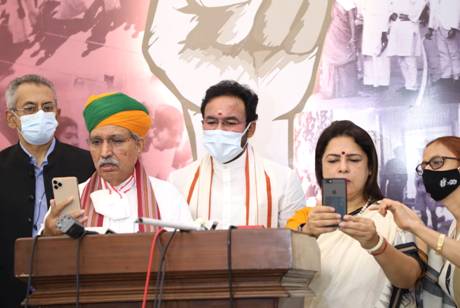 Throwing light on the history related to this exhibition, Shri Arjun Ram Meghwal said that after the arrest of other senior leaders including Mahatma Gandhi, the Quit India movement had spread spontaneously across the country. During that time, the command of the movement passed  into the hands of the youth like Ram Manohar Lohia, Aruna Asaf Ali, Jayaprakash Narayan among others. The youth of 1942, with their leadership and public participation, turned the challenge into an opportunity and forced the British to leave the country. The team of National Archives of India deserves congratulations for organizing this exhibition, Shri Meghwal said.

Smt Meenakshi Lekhi said  that the Quit India Movement was an important milestone in the Indian freedom struggle. Under the leadership of Mahatma Gandhi, people all over India came together to overthrow imperialism. On this day in 1942, Gandhi gave the slogan ‘Do or Die’ to all Indians to drive out the British from the country. We got freedom only when the common people of the country joined this movement. Today, the spirit of the freedom movement is being highlighted so that the youth and coming generations will know about the sacrifices made by our countrymen at that time, Smt Menakshi Lekhi said.

The exhibition has several segments which outline the circumstances leading to the Quit India Movement, how it became a mass movement, the heroes of Quit India, impact on the ground, imprint of the movement , atrocities by the colonial rulers and  its consequences among others.

The Quit India Movement was started by Mahatma Gandhi on August 8, 1942, during the Second World War, demanding an end to British rule in India.

The dignitaries spent significant time at the poem on the Quit India Movement penned by the former Prime Minister Shri Atal Behari Vajpayee which was published in the Abhyudaya, a newspaper associated with Shri Madan Mohan Malviya, in 1946 and appreciated famous lines in the poem  “कोटि कोटि कंठों से निकला भारत छोड़ो नारा, आज ले रहा अंतिम सांस ये शासन हत्यारा” which brought out the essence of the Quit India Movement.

Quit India Movement, 1942 is significant especially because it brought home to the British that it would not be possible to continue to govern India and forced them to think of ways they could exit the country. The Movement was accompanied by a mass protest on non-violent lines by which Mahatma Gandhi called for “an orderly British withdrawal; from India.” Through his speeches, Gandhi moved people by proclaiming that “every Indian who desires freedom and strives for it must be his own guide…” Launching the movement on 8th August 1942 Gandhiji declared in his immortal “Do or Die ” speech, “Let every Indian consider himself to be a free man” The Royal Dance Retreat at Rajasthan